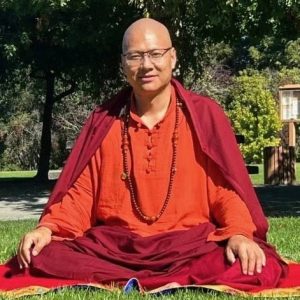 His Eminence the 14th Chonyi Gyamtso Rinpoche was born to a prominent Gelukpa family in 1978, in Ninglang county, Lijiang, Yunnan, China. He received a conventional education and attended Kunming Medical School in 1996. However, he renounced worldly life in 1997. He was recognized by HH Chamgon Kenting Tai Situ Rinpoche as the reincarnation of the 14th Orgyen Lungzin Chonyi Gyamtso Rinpoche, and was later acknowledged by the lineage masters and the State Administration of Religious Affairs. Afterward, he did extensive study and retreat in the Kagyu tradition for many years. On October 12, 2008, he was enthroned at his main seat Kang-Pu-Shou-Guo Monastery (Shou-Guo Monastery) (the national temple of well-being and long life) in Weixi, Yunnan. Thousands of monks and tens of thousands of devotees attended the ceremony.

The lineage of Kyabje Chonyi Gyamtso Rinpoche holds the traditions of both Dzogchen and Mahamudra. The first Tulku Chödpa Lugku (the lamb who practices Chod) was a disciple of Machig Labdrön, the 11th-century yogini who established the Chod lineage in Tibet. The fifth to the ninth reincarnations practiced within the Dzogchen Nyingma Lungzin tradition. HH Karmapa and HH Chamgon Kenting Tai Situ Rinpoche invited the 9th Chonyi Gyamtso Rinpoche, who was at Gatuo Monastery at that time, to be the abbot of Shou-Guo Monastery, the foremost Kagyu monastery in northwest Yunnan, which has been his main seat up to now.

HE Chonyi Gyamtso Rinpoche’s root guru is HH Chamgon Kenting Tai Situ Rinpoche. He has also followed the revered and accomplished 82-year-old Lama Garshi, who is the heart son of the great master Dzogchen Garnou from Kham, to practice the Six Dharmas of Naropa. As to the teachings of Geluk tradition, Rinpoche has relied on Traga Rinpoche, who is the tulku of Litang Monastery in Kham and is now over 90 years old. He has studied and practiced the Nyingma tradition with the great accomplished master Chatral Rinpoche.

After his enthronement in 2008, Kyabje Chonyi Gyamtso Rinpoche prostrated to the pilgrimage site of the four sacred mountains in mainland China three times, and to Jizu Mountain six times. On August 8, 2009, he led more than 100 disciples from Taizi Snow Mountain in Yunnan, and prostrated to the Jokhang Temple for more than 2,100 kilometers in 11 months, which was an unprecedented event.

While keeping to traditional Dharma topics, Rinpoche uses modern colloquial language, examples from daily life, and humor in his own refreshing presentation of the Dharma.  Presenting Mahamudra as the ground, Mahamadhyamika as the path, and Maha-Ati as the fruition, he discusses the essentials of the Buddhadharma, communicating the profound points of the doctrine in a simple and easy-to-understand manner.