Our latest Million Mani Challenge was in June 2022 during the holy month of Sakadawa. We surpassed our goal with a total of 1,237,554 mantras accumulated collectively by more than 50 participants. A number of those participants have been inspired to continue reciting manis to reach a million and eventually join the Million Mani Club. We welcomed two new Million Mani Club members during the Sakadawa Challenge: congratulations to John Fallon and Jim Streit!

What is the Million Mani Club? 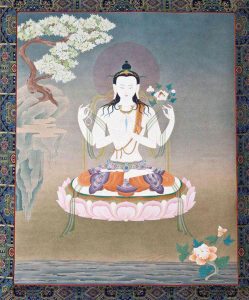 The Palpung Thubten Choling Million Mani Club was established in December 2012, when our monastery sangha banded together with the aspiration to accumulate one million recitations of the mantra of compassion, om mani peme hung, to benefit the long life, health, and well-being of our teachers and all sentient beings. The word spread quickly, and with the participation of practitioners all over the world, within just a few weeks we far surpassed our original goal, reaching a collective total of over five million manis!

Since then we have recited over a million manis as a group on other occasions, especially during sacred times of the year when merit is vastly multiplied, such as Losar (Tibetan New Year) and Saka Dawa (anniversary of Shakyamuni Buddha’s birth, enlightenment, and parinirvana).

Hundreds of participants have benefited sentient beings and earned merit (momentum toward enlightenment) by reciting mani mantras as part of our group accumulations, and almost two dozen individuals have gone on to accumulate a million or more recitations on their own, thus becoming members of the Palpung Thubten Choling Million Mani Club.

We invite you to join us – all you have to do is recite manis at your own pace and track them with our online tool on this page. Designed by Dean Hill for our very first mani challenge in 2012, it not only records your current mani count but also reports your cumulative total back to you, along with your entire mani-reporting history.

When you reach a million manis, you’ll be added to the club! Of course, there is no need to stop there: several Million Mani Club members have accumulated two million or more. Explore the topics below to get started:

What is a Mani?

Mani is short for the sacred six-syllable mantra of the bodhisattva of compassion, Chenrezig or Avalokiteshvara. Chenrezig’s form represents, embodies, and radiates the fully awakened compassion of all the buddhas — which is also innate in our own minds. We too are said to be buddha in essence, the union of wisdom and compassion. Reciting the mani mantra helps remove obscurations to manifesting our fully awakened nature, and sends postive compassionate energy into the world.

The mantra may be pronounced either om mani peme hung (Tibetan pronunciation) or om mani padme hum (Sanskrit pronunciation). When we recite it, we maintain the aspiration to free all sentient beings from suffering, and can also include any specific people or animals we know to be suffering in any situation. We can also recite it in response to our own suffering. It is traditionally said that any being — human, animal, insect, or invisible being — who hears this mantra even once will eventually attain freedom from suffering and the full awakening of a buddha.

Om mani peme hung is the most commonly recited mantra in Tibet. Everyone knows it, even young children, and many elderly Tibetans who can no longer work spend their days reciting manis for the benefit of their loved ones and all beings. Prayer wheels are often filled with mani mantras.

If you’d like to learn more about Chenrezig and the sacred power of the mani mantra, we highly recommend Bokar Rinpoche’s book Chenrezig Lord of Love.

We Will Help You Count!

You can  report your mani accumulation on this page at any time, always using the same email address each time you report your numbers. Our system will automatically organize your entries. If a sangha or group is accumulating manis together, the collective total can be reported using a single email address for the group, or you can track your manis individually, keep your own group count, and let us know by email when your group has reached a million.

Each time you report, your subtotal will be automatically added to your previous count and you will receive an email confirmation with your current total along with a history of previous numbers you’ve submitted.

If you have questions or need support at any point, you can email the Million Mani Club Coordinator.

When you reach a million manis, we’ll add your name to the official roll of the Million Mani Club. If you accumulate another million, we’ll acknowledge both achievements.

How To Count Mantras

Using a mala: It’s traditional to count mantra recitations using a string of 108 prayer beads that is similar to a rosary. Even though there are 108 beads, each round is counted as just 100, to allow for errors and moments of distraction. Malas can be found at dharma shops online, or in the Palpung Thubten Choling bookstore when the monastery is open.

Mechanical counters: A variety of mechanical tally counters can also be found online. This type of counter can be held in the hand and pressed to register each mantra. There are also various styles of counters you can wear on a finger. These can be found by searching for “prayer counter.”

Phone apps: There are also smartphone apps specifically for keeping track of mantra accumulations. One of the best counting methods we’ve found is using the stopwatch function on a smartphone. Start the stopwatch when you begin, pause it if you get interrupted, and when you hit “stop” you’ll have a precise record of how long you recited. You can then calculate how many mantras you’ve accumulated by using the method below in “counting by time.” You can also use the stopwatch as an aid to figuring out how many mantras you recite on average per minute.

Counting by time: For those who prefer to track mantra recitations by time, or in case of a physical limitation or activity such as driving or washing dishes that makes using a mala or counter difficult, this is another option. You will need to use a mala or counter or pencil on paper to determine how long it takes on average for you to recite 100 mantras, and you can then do the math and track mantra totals according to the length of your recitation period. When this method is used, it’s important to make sure you are reciting continuously and at an even speed so your count isn’t overestimated. If you realize you have become distracted, you can adjust your total to take that into account.

The best and most powerful way to recite manis is during formal practice on the chair or cushion, when your full attention can be clearly focused for a period of time. To further empower your recitation, we recommend doing it within the context of the three aspects of genuine Vajrayana practice: refuge and bodhicitta, the main practice, and dedication of merit to all beings. If you already do the practice of Chenrezig, the bodhisattva of compassion, you can count all mantras recited during your regular practice. If you don’t already have a text, you may download three English versions of the Chenrezig practice: full-length, medium, and abbreviated. Some people prefer to chant in Tibetan and you may use that text as well. Either language is fine: the practice in Tibetan is said to carry the blessings of all the generations of practitioners who have realized Chenrezig through chanting it, while the practice in English connects us directly with the meaning.

It’s also very beneficial to recite manis as you go about your daily activities. It’s easy to recite manis while walking, driving, or waiting for something, and they can also transform any routine activity that doesn’t require full attention, such as household or outdoor tasks, into dharma practice. Manis can even be counted while watching TV, as long as we are careful to keep an accurate count. Reciting manis while circumambulating a stupa or engaging in other virtuous activity is merit upon merit!

Occasionally we are asked if it’s okay to count manis recited during sleep and dreams. Unfortunately, since we are not able to count mantras reliably in these circumstances, we don’t include them in our total. But if you do find yourself reciting manis while you are sleeping, it is certainly an auspicious sign!

As with formal practice, the benefit of informal recitation is also strengthened if we remember to renew our refuge and bodhicitta at the beginning and dedicate the merit at the end. This can be done with traditional prayers, in our own words, or just by remembering our intention.

A note about volume: When alone or with others who enjoy hearing mantras, it’s fine to recite aloud. In fact, it’s considered very beneficial for animals, insects, and other beings to hear mantras, especially om mani peme hung. In public or within earshot of others who might not be receptive to Buddhist mantras, it’s best to recite silently or in a barely audible voice (traditionally described as “to the shirt collar,” meaning no one can hear it but you).

We are taught that when we practice or recite mantras together as a group (with a local or online sangha, or as part of an organized group recitation such as Palpung New York’s million-mani initiatives, which are open to everyone), the benefit and merit of our individual recitation is multiplied by the number of participants. So we encourage group practice whenever feasible, in addition to the ongoing benefit of individual recitation.

We hope you will join us in benefiting beings and earning merit by reciting the mantra of compassion om mani peme hung and keeping track of your numbers through the mani counter on this page. And if you continue reciting manis over time, we very much look forward to welcoming you to the Palpung New York Million Mani Club.

The more opportunities we find to recite manis throughout the day, the more we develop a habit of reciting them, and soon we may find ourselves reciting manis in the back of our mind without even thinking about it. This is an illustration of how we can turn our typically samsaric propensity to form habits into a positive momentum toward enlightenment.

Congratulations to all our Million Mani Club members!