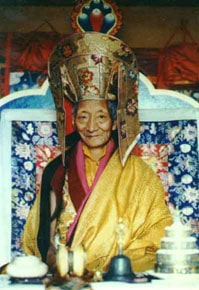 During his last visit to Palpung Thubten Choling in 1986, Dorje Chang Kalu Rinpoche recited two sets of mantras to benefit beings, which were recorded on audiotape. During the more than four decades since these recordings were made, many people have played them for those who are dying, as a means of liberation; and for animals, as a cause for precious human rebirth.

Kalu Rinpoche gave a short explanation of the mantras, which was translated orally by Lama Yeshe Gyamtso, and is included in the recordings below. He described the mantras for animals as “profound mantras and dharanis spoken by the Buddha in the sutras and tantras… such that even the hearing of them brings liberation… If you play this tape in a place where there are many animals – fish, birds, and so forth – and they hear this, then this will establish the cause for their finding a precious human rebirth in the future, and establish the causes for many other benefits for them as well.”

With respect to the mantras for those who are dying, Kalu Rinpoche said they are beneficial for both dharma practitioners and also for those who don’t know the dharma, as long as they don’t have an aversion to it; and that it would be beneficial to play them once or several times a day. More details may be heard in the recordings below.