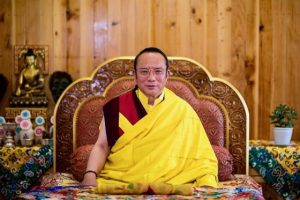 In early 2020, as many parts of the world went into lockdown in the face of the global covid pandemic, Palpung centers and other Dharma communities all over the world began to request online transmission of the precious Dharma from our lineage teachers, Guru Vajradhara Chamgon Kenting Tai Situpa and His Eminence Yongey Mingyur Rinpoche.

Guru Vajradhara His Holiness Chamgon Kenting Tai Situpa is the holder of the Palpung Lineage, and the spiritual head of Palpung Sherabling in India with its worldwide Palpung Congregation of monastic and lay dharma communities, including Palpung Thubten Choling Monastery and its affiliated centers in the United States. He has taught many times at the monastery since the early 1980s, most recently in 2016, and bestowed empowerments to initiate several cycles of the three-year retreat. 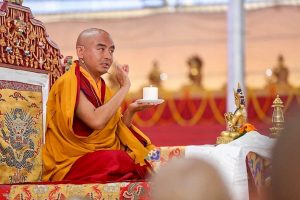 His Eminence Yongey Mingyur Rinpoche is the Heart Son of Guru Vajradhara His Holiness Chamgon Kenting Tai Situpa and an important lineage holder in his own right. He has taught at Palpung Thubten Choling on several occasions since his first visit to the U.S. in 2002, and presided over the North American Kagyu Monlam prayer festival at PTC in 2016.