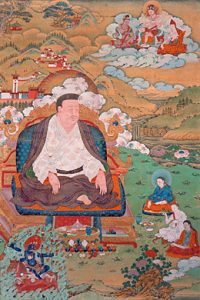 Kenting Tai Situpa appeared in the past as Marpa (1012-1097) the Translator. In this life, he was the spiritual heart son of the eminent Naropa and Maitripa; he was the yidam Hevajra appearing in human form. Marpa, conveyed the mahamudra teachings from India to Tibet, is renowned as the founding father of the Kagyu Lineage in Tibet, which became the source of an infinite number of accomplished masters.

Marpa incarnated in 1012 in Lhodrak, southern Tibet. As a child, just the sight of him created a sense of fear and awe, few could even look at him. So, his father sent young Marpa to study under a Sakya teacher named Drogmi Lotsawa, one of the main masters who the Sakya family received their transmissions (of Virupa’s lineage) from. From this teacher, Marpa learnt Tibetan grammar, poetry and drama from him over a period of some 15 years and became a master not only of Tibetan but also of Sanskrit and Indian dialects.

Marpa then returned home. He had decided to go to Nepal for further study. He travelled to Nepal and remained there for some three years learning more about India and its languages. He also heard of Naropa, one of the most famous scholars and masters of meditation, who was living in India and determined to go to him.

Marpa became the disciple of Naropa, whom he spent over sixteen years practicing under. He also studied with over one hundred other gurus including Maitripa, Kukuripa and Jnanagarbha. He translated the teachings he discovered into Tibetan. Moreover, he practiced them until full attainment of their meaning was achieved.

Ngo, a translator, accompanied Marpa for some of the way back to Tibet. Ngo, jealous of his companion, conspired to have Marpa’s sacred texts and translations fall irretrievably into a large river they were crossing by boat. This proved a powerful moment for Marpa, who at one and the same time saw the work of many years lost in a few seconds but also knew that there was no loss since he held all the teachings in his heart and had achieved realization of their innermost meaning through meditation.

Marpa had needed to return to Tibet to disseminate some of the teachings he had gathered in India and which had not yet reached Tibet at the time. He also needed to raise funds, to give to his Indian gurus on behalf of the Tibetan people, thereby involving them karmic/ Dharmic in his historic journeys. Over this and his other two visits to India, Marpa studied, perfected and brought back to Tibet the following teachings, among others:

He received these from gurus Naropa, Maitripa, Jnanagarbha, Sukhasiddhi, Kukuripa and others.

It is said that Kukuripa (one of the 84 mahasiddhas in India) resided on an island in the middle of a poisonous lake, Marpa swan to across the lake to accept the mother tantras from him.

Marpa had already visited India twice when the dakinis predicted that he must visit India again, to receive the formless dakini teachings from Naropa. This coincided with a powerful dream that his disciple (Milarepa) had, concerning a special form of consciousness transference (powa).

Marpa did not have teachings on this and knew he should get them from Naropa. Marpa was by now quite old and not in good health. It is dangerous for him to undertake such a rough journey. His students suggested that he might send his son, Dharma Dode, in his place. Not listening to the advice of his students, Marpa left Tibet for India, according to the predictions of the dakinis.

When the latter arrived in India, he met friends and senior disciples of Naropa, who told him that Naropa had just disappeared in a ‘rainbow body’, to another realm. One after another, they expressed their opinion that Marpa had such deep faith and devotion for his guru that he might be able to meet him again if he looked for him. After 16 months of finding and confronting numerous difficulties, Marpa finally met Naropa, adorned with six ornaments of bone, on the summit of a cliff. Having searched for Naropa for so long, filled with joy at finding him, he climbed up and embraced him immediately. Naropa was delighted to see Marpa, and told him, “I am now going to reveal a teaching that is unknown in the Land of Snows, Tibet. You are the one chosen to take this precious teaching to there.”

Naropa once again gave Marpa all the empowerments that he had already given Marpa before, to refresh the memories of his teachings. In addition to that, he gave a very profound teaching that he had never revealed to anyone before: the Six Yogas of Naropa. Naropa then said, “Now, Marpa, your realization is entirely equal to my realization. There is no need for you to obtain further instructions or empowerments from me. You must go back to Tibet as my regent, and spread and cultivate this lineage.” Naropa predicted that the lineage flowing from Marpa, through his disciples, would continue into the future, and that each successive lineage holder and his students would be brighter and have greater opportunity to achieve realization.

And when he heard that Marpa’s student was Milarepa, and that Milarepa had had the dream about powa drongjuk, he immediately folded his hands together in a gesture of reverence and respect, and bowed toward the direction of northern India. Naropa predicted that where there are beings living in the womb of darkness, Milarepa would be like the sun radiating upon the stainless snow, removing the darkness. It is said that because of this gesture of profound respect, all the trees there seem to also bow in that direction.

With all these extra and very precious teaching from his gurus, Marpa returned to Tibet. On the way, he had very significant and powerful dreams of gurus Maitripa and Saraha. From the former, Marpa received, twice, complete transmission of the samatha and vipasyana aspects of mahamudra.

On his return Marpa gave many teachings. Marpa did not gather a great number of disciples around him and did not become a widely popular guru. He remained a short-tempered and aggressive teacher, and not many students liked him, and not many believed in his realization and his accomplishment. His teaching was a question of quality rather than quantity and his disciples were extremely gifted.

When Marpa was passing away, he performed many miracles. And after he passed into parinirvana, his transmissions became very widely cultivated and spread around Tibet. Only then did the people in his village and other villages realize what a highly realized and important person Marpa really was; only then did they start to develop profound feelings for him.