As the symbol of the Buddha’s enlightened mind, the stupa is a field of enormous merit which benefits all beings by preventing disease and obstacles, and by promoting harmony and prosperity. Making any connection with the stupa is a particular blessing for those who are sick, dying, or experiencing obstacles. The virtue accumulated by contributing even a small amount to this project is inconceivable – like a drop of water becoming inseparable from a great ocean of merit. 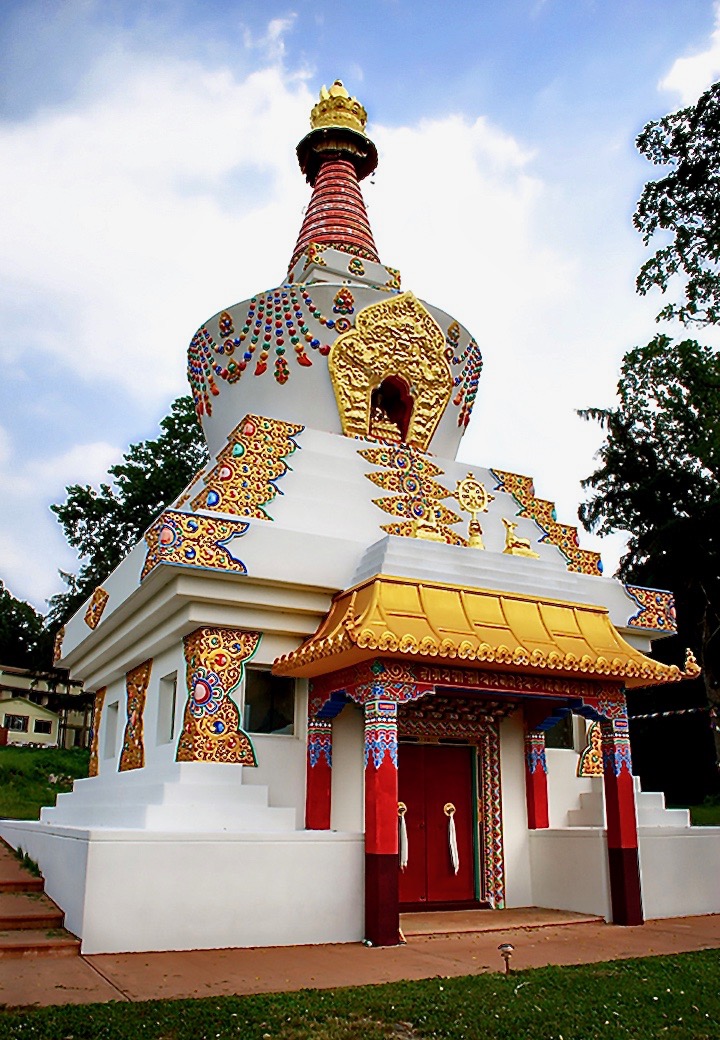 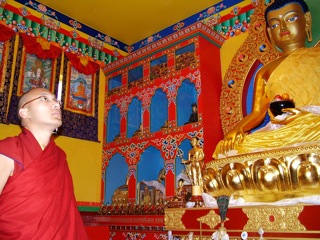 Stupa open by appointment only.
Please call 845-297-3843 to schedule an appointment.

In 1989, just before his parinirvana, Dorje Chang Kalu Rinpoche asked Lama Norlha Rinpoche to build a stupa on our monastery’s land overlooking the Hudson River. After years of preparation and work in a persistent effort to realize Rinpoche’s vision, the Enlightenment Stupa is now complete.

Designed in accordance with traditional shapes and proportions, the stupa is visible from the distant mountains and reflected in the Hudson River, blessing its waters on their way New York City and the sea.

The ornamentation of the stupa was created by Lama Chopal and Youngdrung, both gifted craftmen trained in traditional Tibetan art.

There are many stupa photos on view in the Online Photo Galleries.

Samchen Chöling Retreat Center, Charlottesville, VA
A 35-foot-high stupa has been erected on the site of a new retreat center founded by Lama Norlha Rinpoche. The base of the stupa houses a traditionally designed shrine room containing a statue of the Buddha Shakyamuni. Lama Chöpal, a master of traditional Buddhist art, has finished painting a mural of the 35 Buddhas on the shrine room walls.

Bodhgaya, India
The first stupa built by Lama Norlha Rinpoche stands in the sacred land of Bodhgaya, where it is prophesied that all the 1000 Buddhas of the three times will attain enlightenment. Completed in 1986, it is one of a very few examples of a Kalachakra Stupa, which provides special blessings of freedom and peace.

Kala Rongo Convent, Nangchen, Eastern Tibet
The sacred land of Kala Rongo, the site of a Guru Rinpoche meditation cave, has become home to one of the finest convents and retreat centers in Tibet. A 60-foot Guru Rinpoche stupa has been built there along with a more recently built Enlightenment stupa.

Korche Monastery, Nangchen, Eastern Tibet
The monastery where Lama Norlha Rinpoche received his training is the residence of 180 monks and includes two three-year retreat facilities and a monastic college. A 60-foot high Guru Rinpoche stupa has been built on the monastery grounds.

Qinghai Province, Eastern Tibet
In Amdo region, located in northeastern Qinghai Province, three stupas have been built. One of them was completed on the special occasion of Sakadawa. Auspicious signs, such as a rainbow, appeared during the consecration ceremony.

Sonada, India
Construction of the Tashi Gomang Stupa — Stupa of Many Auspicious Doors — is underway in Sonada, India.  Dedicated to the memory of the kindness of both His Holiness the 16th Gyalwa Karmapa Rangjung Rigpe Dorje and of Dorje Chang Kalu Rinpoche, the Tashi Gomang Stupa is located on property adjacent to Samdrup Tarjay Choling, Dorje Chang Kalu Rinpoche’s monastery in Sonada.  The property is also intended as the future site of Samdrup Tarjay Choling’s monastic college (“shedra”)

Village Stupa, Nangchen, Eastern Tibet
A privately sponsored 45-foot stupa, containing a prayer wheel filled with Dorje Sempa mantras, has been constructed in a village in Nangchen, eastern Tibet, at the request of the local residents there.

Read more about this stupa in The NYEMA Sun, Fall 2002 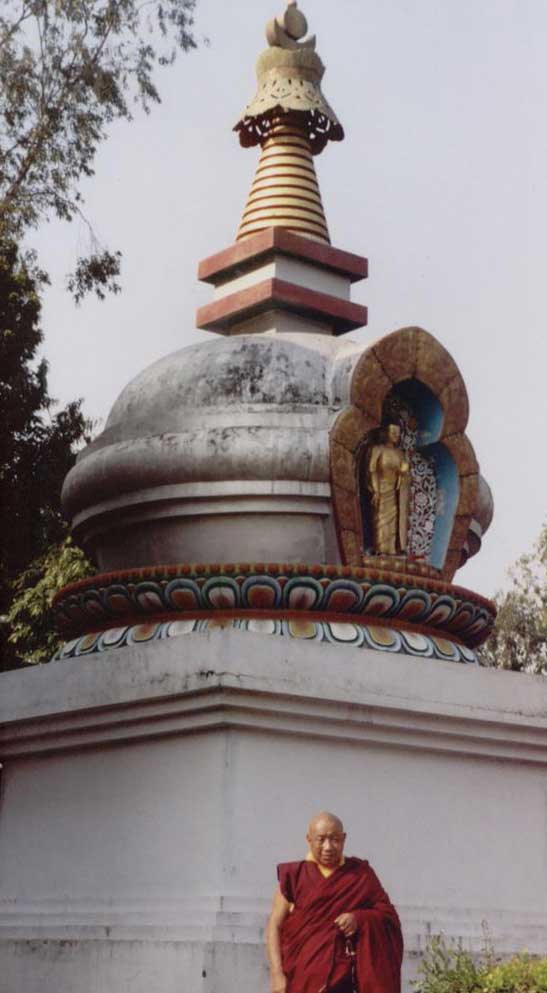 Please consider joining Palpung Thubten Chöling Monastery or an affiliate center near you. Support through membership serves not only as a meaningful way of participating in center activities, but also as a means of preserving and spreading the wisdom of the Buddha.

We look forward to welcoming you!

Our mission is to support Buddhadharma through our work at PalpungNY. If you are interested in volunteering to support this mission, we’d love the help!