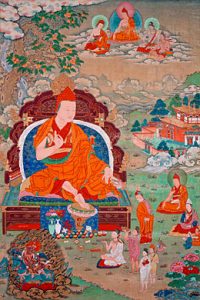 Taranatha (1575-1634) took birth in Drong, Tibet, on the birthday of Guru Padmasambhava. He is considered to be none other than Manjushri and was proclaimed a tenth-level bodhisattva.

Taranatha entered the great Jonangpa order of Tibet and became a student of the Indian master Buddhagupta. As a child, Taranatha was renown for his amazing abilities and was recognized by all as a realized master.

By the time he was only a year old, Situ Taranatha could read and write, walk, and practice meditation without any imperfection. He also could name all the deities in any thangka, even those so worn and dirty that no one else alive could tell which deity was painted. He already could heal people from disease.

One time, a yogi appeared in Taranatha’s home, to his parent’s surprise. The self-arisen yogi offered Taranatha a dagger, hidden by Guru Padmasambhava as ter (hidden treasure).

Taranatha was the crown scholar and historian of all of Tibet. He studied the history of the various lineages, tracing them through India. He took great care to accurately record the history of Buddhism and the biographies of the great masters. And also, Taranatha mastered all of the scriptures and wrote his own commentaries. Taranatha transmitted the Buddha’s teachings in their purest form. His vast works include the History of Buddhism in India and the Origin of the Tantra of the Bodhisattva Tara.

In 1614 Taranatha founded the important Jonangpa center Phuntsokling Monastery, in the Tsangpo Valley about 200 miles west of Lhasa.

Taranatha was a holder of the Shangpa Kagyu lineage and the Kalachakra transmission. These transmissions, along with those of the Jonangpa order, were later on integrated into the other lineages of Tibetan Buddhism.

Taranatha later on went to Mongolia, and passed away there. His remains were enclosed in a silver Stupa east of Lhasa.