Kyabje Dorje Chang Kalu Rinpoche was a yogi, scholar, and one of the great meditation masters of the Buddhist tradition. His teachings were sought by lamas of all four schools of Buddhism in Tibet. Lineage holder of the Shangpa Kagyu tradition and senior Meditation Master of the Karma Kagyu tradition, he was foremost in spreading the Dharma to the West and establishing Dharma and facilities for Westerners to undertake the traditional three-year retreat.

Kyabje Dorje Chang Kalu Rinpoche was born in 1905 in the district of Treshö Gang chi Rawa in the Hor region of Kham, eastern Tibet. His father, Karma Lekshe Drayang, the Thirteenth Ratak Palzang Tulku, was noted for his skill in the practice of medicine, his literary accomplishments and his mastery of Vajrayana meditation practice. He and his wife, Drolkar Chung Chung, Rinpoche’s mother, were students of Jamgon Kongtrul Lodrö Thaye, Jamyang Khyentse Wangpo, and Mipham Rinpoche—great leaders of the nineteenth century ri me movement which revitalized Buddhism in Tibet by minimizing sectarian differences and stressing the importance of meditation, the common ground of all lineages.

Both of Kalu Rinpoche’s parents were devoted to practice and undertook a religious retreat immediately after their marriage. They saw little of each other during this period, but one night both dreamed that they were visited by their deceased teacher, Jamgon Kongtrul, who announced that he was coming to stay with them and asked to be given a room. Not long afterwards, Drolkar Chung Chung discovered she was pregnant.

One day while gathering medicinal herbs with her husband, Drolkar Chung Chung realized she was about to give birth. As they hurried back to their house, they saw the sky filled with rainbows. Relatives reported that the baby chanted Om Mani Peme Hung as soon as he was born, and sat in the seven-point posture, gazing around him compassionately.

Such portents were interpreted in the neighboring countryside as signaling the birth of a special incarnation (Tib. tulku). Conventionally, a tulku would have been raised in a monastery at the earliest possible age, but Kalu Rinpoche’s father refused to follow this course. If the boy were not a high incarnation, he said, the training would be wasted; if he were, he would be quite capable of seeking the appropriate teachers and education for himself. That is just what he did.

As a youth, Kalu Rinpoche had by nature no interest in worldly concerns and yearned only to practice meditation in isolated places. He displayed keen intelligence, strong devotion, and compassion towards every living being. He would stop to bless even the smallest insect. His father, skilled in the five traditional sciences, trained Kalu Rinpoche himself, making sure that Kalu Rinpoche rose early each morning and exerted himself in his studies and Dharma practice. He knew that his son possessed exceptional qualities and believed he would become a second Milarepa.

At Palpung Monastery, Kalu Rinpoche studied the teachings of the sutras and tantras, receiving both instruction and empowerments from many great lamas. At age fifteen, during the traditional rainy-season retreat, he gave a profound discourse on the three vows before a large assembly of monks and lay people.

At sixteen, Kalu Rinpoche entered Kunzang Dechen Osal Ling, the retreat center founded by Jamgon Kongtrul Lodrö Thaye and one of the two retreat facilities associated with Palpung Monastery. Here he completed the traditional three-year retreat under the direction of the retreat master, the Venerable Lama Norbu Dondrup, from whom he received the complete transmission of the Karma Kagyu and Shangpa Kagyu Lineages. During this period, Kalu Rinpoche began to have many dreams in which he visited pure lands and received teachings from Buddhas and Bodhisattvas. When he described these experiences, his root lama showed little interest, telling him plainly that dreams are just an illusion, neither good nor bad, explaining, “These dreams are experiences that arise in practice, but the important point is to meditate and realize your own mind as Mahamudra. Dreams will never be the cause of enlightenment.”

Deeply inspired by these words, Kalu Rinpoche resolved to turn away completely from worldly activities and dedicate himself to accomplishing perfect enlightenment. At age twenty-five, he departed for an extended retreat in the desolate mountains of Kham. Wandering without possessions, taking shelter in caves and under cliffs, seeking and needing no human company, he intended to spend the rest of his life in solitude.

After Kalu Rinpoche spent twelve years meditating in this way, his lamas saw that it would benefit all beings greatly if he were to return and teach the Dharma. At their request, he returned and was appointed master of Jamgon Kongtrul Rinpoche’s three-year retreat at Palpung Monastery. When two retreats were completed under Kalu Rinpoche’s direction, he asked Tai Situ Rinpoche and Palden Khyentse Ozer for permission to make a pilgrimage to Lhasa. He wished to travel like a beggar, carrying his own food and clothing, but Tai Situ Rinpoche objected, saying, “You are like my precious jewel,” and offered him many yaks and attendants. Kalu Rinpoche, however, accepted only half the number of yaks and went accompanied only by his brother and one monk.

In Lhasa, Kalu Rinpoche organized the rebuilding of several Shangpa holy sites that had been destroyed and gave Shangpa Lineage initiations and teachings to many geshes, lamas, and tulkus. While visiting Tsurphu Monastery, he offered everything he had to the Sixteenth Gyalwang Karmapa, Rangjung Rikpay Dorje, who recognized Kalu Rinpoche as the activity emanation of Jamgon Kongtrul Lodrö Thaye.

In 1955, a few years before the full Communist military occupation of Tibet, Kalu Rinpoche again visited the Sixteenth Gyalwang Karmapa, who asked him to leave Tibet in order to prepare the ground in India and Bhutan for the inevitable exile. Kalu Rinpoche first went to Bhutan, where he established two retreat and ordained three hundred monks. Proceeding to India, he made an extensive pilgrimage to all the great Buddhist sites. In 1965 he established his own monastery, Samdrup Tarjay Ling, at Sonada (near Darjeeling, India), which became his principal seat. A few years after founding the monastery, Kalu Rinpoche established a three-year retreat facility there.

In 1971, Kalu Rinpoche began traveling to Europe and North America, where he established numerous Dharma centers. He was the first Tibetan master to build facilities for Westerners to undertake the traditional three-year retreat. In 1982, at the urging of the Sixteenth Gyalwang Karmapa, Kalu Rinpoche bestowed the complete Kalachakra initiation in New York City. He stayed at Kagyu Thubten Chöling Monastery for three months, where he taught hundreds of disciples and bestowed initiations upon students preparing for the three-year retreat there. In June 1982, Kalu Rinpoche performed the commencement ceremonies for the very first traditional three-year retreat in North America.

The following year, at his monastery in Sonada, Kalu Rinpoche bestowed the great cycle of empowerments called the Rinchen Ter Dzö—one of the Dzö Chen Nampar Nga or “Five Great Treasuries” of teachings and empowerments gathered by Jamgon Kongtrul Lodrö Thaye—upon the four heart-sons of the Sixteenth Gyalwang Karmapa, as well as upon hundreds of tulkus, lamas, monks, nuns, and lay people.

During his 1986 visit to Kagyu Thubten Chöling Monastery, Kalu Rinpoche announced that due to his advanced age, he would probably not be able to come back again.  He invited everyone to visit him at his monastery in Sonada, where he would be residing. Nevertheless, despite his age, Kalu Rinpoche gave a full cycle of teachings and empowerments and ordained many monks and nuns. After several more years of extensive Dharma activity in many countries,  he returned to his monastery in Sonada. On May 10, 1989, in a state of profound meditation, Kalu Rinpoche left for the pure realms. 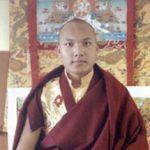 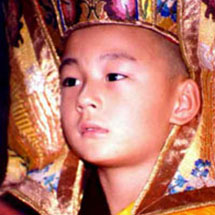