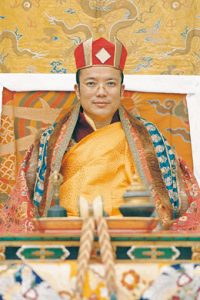 The 12th Kenting Tai Situpa, Guru Vajradhara Chamgon Kenting Tai Situpa Pema Donyo Nyinche Wangpo, was born in the male wood-horse year (1954) in the Palyul section of the Derge province to a family of farmers. On the day of his birth, the entire region witnessed two solar orbs illuminating the sky. The details of his birth were completely in accordance with the prediction of the 16th Gyalwang Karmapa.

He was taken to Palpung monastery and at eighteen months was enthroned there by the 16th Gyalwang Karmapa , also the King of Dege with his ministers, representative of His Holiness Dalai lama and all the Kagyu Rinpoches and representative of China were joined. At that time it was acknowledged that he clearly recognized his old attendants and disciples.

At the age of five years old, Kenting Tai Situpa went to Tsurphu. For the first time, Kenting Tai Situpa assisted by 9th Sangye Nyenpa Rinpoche performed the ceremony of the Red Vajra Crown at the chamber of His Holiness 16th Karmapa. At the age of six years old, for the political conditions and on the advice of the 16th Gyalwang Karmapa, he fled historic Tibet. He traveling first to Bhutan, and later joining the Gyalwang Karmapa in Rumtek Monastery, Sikkim, India.

Shortly after arriving in Sikkim, Kenting Tai Situpa contracted tuberculosis. After receiving medical treatment in Darjeeling, he returned to Sikkim. He struggled to live and attended aid from relief organizations. He received all the transmissions of the lineage from His Holiness 16th Gyalwang Karmapa who is Vajra Dhara for 12th Kenting Tai Situpa, also some of the pith instructions are received from 9th Sangye Nyenpa Rinpoche, Dilgo Kyentse Rinpoche, Kalu Rinpoche and Saljay Rinpoche. Most of philosophical trainings received from Very venerable Thrangu Rinpoche, late Drikung Khenpo Konchok, late khenpo Khedup and from many other teachers under their guidance.

In 1974, at the age of 21, he went to Ladakh with the invitation from late Druppon Dechen Rinpoche and stayed there for one year to turn the wheel of Dharma. In 1975, at the age of 22, he assumed his traditional responsibilities by founding the monastic project, Sherab Ling, at the request of his followers who had settled in Bir, northern India.

In 1980 he made his first tour to Europe, and has since traveled widely in North America, Europe and South-East Asia teaching Buddhist philosophy and meditation at the request of Buddhist, humanitarian and multi-faith organizations.

In 1983, Kenting Tai Situpa founded the Maitreya Institute, a nonsectarian forum for inter-religious dialogue. In this year, he also received the Rinchen Terdzo, the great Treasury of Hidden Treasure Teachings, empowerments and teachings from the 1st Kalu Rinpoche.

In the winter of 1984 the Kenting Tai Situpa made his first return to historic Tibet. “It was a completely non-political religious trip,” he emphasized, “prompted by the spiritual needs of the people.” He was invited to an enormous number of monasteries of all traditions, where he gave teachings and empowerments, one of which was attended by over 100,000 people – which is astonishing given the remoteness of Palpung monastery.

In 1989 he lead the Pilgrimage for Active Peace to inspire people to take an active involvement in world peace. A documentary was made of the event which included an audience with Pope John Paul II, an exchange with the Benedictine monks in Assisi, prayers for peace on Mt. Shasta, and an interfaith dialogue with the spiritual leaders such as His Holiness Dalai lama, Shankar Acharya of Dhurga , Acharya Muni Sushil Kumar and many of the world’s main religions in India.

He returned to historic Tibet in 1991 where he ordained more than 1200 monks and nuns and transmitted a series of empowerments, (Dam Nga Zod), that was attended by over 65 reincarnate lamas, an estimated 5000 ordained Sanghas from 92 monasteries, and countless laymen.

As a Buddhist master, he regularly tours the world giving teachings and empowerments at the request of the Dharma Centres, and holds long-term Mahamudra courses to introduce the most profound and sacred of the Karma Kagyu teachings.

In January 2000 the 17th Gyalwang Karmapa, Orgyen Trinlay Dorje, made a daring escape from his monastery, to be able to continue his religious studies. The Kenting Tai Situpa is now guiding his spiritual training and giving all the transmissions of the Mahamudra Lineage in exile near to Dharamsala, India.

In 2006, from August to November, he performed the Rinchen Terdzo empowerments and teachings for the major accepter, H.E. the 4th Jamgon Kongtrul Rinpoche whose previous incarnation the H.E. the 1st Jamgon Kongtrul Rinpoche revealed and collected these teachings, among over 2,000 people are gathered including 50 incarnated Rinpoches, over 1500 ordained sanghas and many of devotees from 27 countries.

In 2007, from August to October, Kenting Tai situpa continued the transmissions and empowerments of Kagyu Ngakzod and Dam Ngakzod of the Five Treasures at Palpung Sherabling monastic seat.