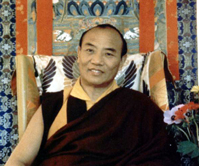 Rangjung Rigpe Dorje was born into a noble family in the kingdom of Derge, in eastern Tibet. Guided by the prediction letter left by the previous Karmapa, and by visions which clearly revealed his birthplace, the supreme lamas of the Kagyu lineage quickly identified him. At the age of seven, he traveled to Palpung Monastery, where he received the novice ordination from the Eleventh Tai Situpa. He then proceeded to Lhasa, where His Holiness the Thirteenth Dalai Lama performed the haircutting ceremony. From there, he traveled to Tsurphu Monastery, traditional seat of the Karmapas in Tibet, where he was enthroned in the presence of official representatives of Tibet, Bhutan, Nepal, Sikkim, India, and Ladakh. Immediately thereafter, he began his formal training, receiving transmissions from the masters of all the great lineages of Tibetan Buddhism.

As communist forces gradually took control of Tibet, His Holiness made several pilgrimages to Bhutan, Nepal and India, whose leaders gladly offered their assistance. When war reached central Tibet, Karmapa left his homeland and sought refuge in India. Chogyal, the King of Sikkim, offered him the choice of several sites, and Karmapa chose to build his new Dharma seat near the old Rumtek Monastery, founded in the 16th century by the Ninth Karmapa.

His Holiness graced all he met with his presence and blessing. Often, while bestowing empowerment, he would descend the throne and administer the blessings with his own hands. He sent the lamas of his lineage throughout the world to teach wherever the Dharma was requested, and blessed more supplicants with novice and full ordination than any previous Karmapa. In addition to establishing Dharma in Europe and North America, he sponsored the reprinting of the fundamental canon of the Buddha’s teachings and their commentaries, and distributed these works to monasteries and throughout the Himalayan region.

In 1981, after manifesting signs of illness, His Holiness left a sacred prediction letter describing the circumstances of his next rebirth with the Twelfth Tai Situ Rinpoche. He spent his final days in an American hospital in Zion, Illinois, where he told Lama Norlha Rinpoche and Khenpo Karthar Rinpoche, “I see Tibet, and there I clearly see my father and mother of the future.” Through his gentle, loving kindness and the miraculous display of freedom over ordinary physical reality, he consistently surprised and ultimately overwhelmed the doctors and nurses who attended him. For several days after his death, the region of his heart stayed warm and his skin remained supple, which, according to Tibetan Buddhism, are marks of profound realization of peace and unity.

Further miraculous signs were observed at the time of his cremation at Rumtek in India. Relics fell unburned from the fire. Rainbows appeared in the clear sky, and many people perceived the Karmapa looking down from above. After the cremation, a small footprint was found in the ashes, pointing in the direction of Tibet.

(Excerpted from Karmapa: The Sacred Prophecy)