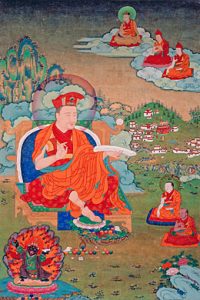 He was born to an educated family in the Yarlung district of central Tibet. As a young child, he demonstrated his awakened potential in the gradual path of Hinayana and Mahayana. At the age of nine, he connected to the Kagyu master Zangri Repa. He received many teachings, including ear-whispered teachings and dohas of the Mahamudra masters. He practiced meditation wearing only a cotton cloth and was therefore called “Rechen”, which means “great cotton-clad yogi.” He experienced many signs of meditative accomplishment.

When he reached the age of fifteen, his teacher, Zangri Repa, passed into parinirvana. Before his passing away, Drogon Rechen was advised to find the disciples of Milarepa’s lineage. In this way, Zangri Repa said that Drogon Rechen could receive the full lineage transmission.

Although Drogon Rechen had already attained great qualities of samadhi, he still was not fully satisfied. Deciding to leave his home to develop his practice further, he journeyed to eastern Tibet. On his way, he met and received many teachings. From Thöpa Samdrup, he received the complete transmission of the Chöd lineage. From Ngari-pa, he received Vajrapani and Vajrasaddhu’s transmissions. From Nyalpa Chosei, he received Manjushri and Mahakala. He also received the heart-drop (Nyithig) lineage of Vimalamitra. Situ Drogon Rechen established eighteen centers of tantric learning, as a result numerous individuals gained realization.

At that time, Drogon Rechen thought, “If these students are like this, it is unnecessary to point out how great their teacher’s realization and achievement must be!” Making a strong commitment, he practiced under the Karmapa’s direction for seven years.

Drogon Rechen became the heart disciple and regent of the 1st Gyalwa Karmapa. He was fully ordained as a monk at the age of thirty-seven and received the name Sonam Drakpa. Drogon Rechen’s principal disciple and the Kagyu lineage holder was Pomdrakpa Sonam Dorje, who revealed the Kamarpa’s prophesy and transmitted all the teachings completely to the second Karmapa.

The 1st Karmapa entrusted the prediction concerning his next rebirth to Situ Drogon Rechen. Starting with Drogon Rechen, the relationship between the Karmapas and Kenting Tai Situpa have been without any interruption.

At the age of seventy, Drogon Rechen passed away. Many relics arose from the cremation.