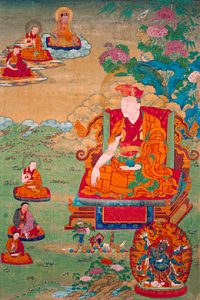 Naljor Yeshe Wangchuk (1220-1281), a preceding incarnation of the Kenting Tai Situpa, was the 2nd Gyalwa Karmapa’s closest attendant. He re-consecrated the sacred tsaritra grounds in southern Tibet, which was previously unveiled by a disciple of Gampopa. Until today, this site remains as a holy place to the Karmapas.