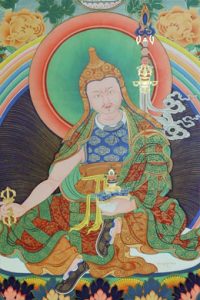 Guru Padmasambhava is renowned as founder of Buddhism in Tibet and the principal guru-deity of the Nyingma school.

Padmasambhava was incarnated as an 8 year old child appearing in a lotus blossom floating in Lake Dhanakosha, in the kingdom of Uddiyana. The king of the Odiyana, Indrabodhi, brought him back to his palace and crowned him as the prince of the kingdom.

Padmasambhava perceived that since politics is contradictory to his pursuing of enlightenment, he abdicated thereafter. He then went to Bodhgaya and many places receiving teachings from many great scholars, masters and Dakinis.

He accomplished the common and uncommon siddhis, comprehended and accomplished the whole canon of the three baskets of Vinaya, Sutra and Abhidharma, as well as the teachings of the outer and inner secret mantra, oral transmissions, and the pith instructions of the highest and innermost tantra of Atiyoga. The mandalas and Buddhas displayed their forms in front of him spontaneously. Thus he showed the signs of perfect level of complete awareness.

Padmasambhava visited and stayed in many places in India, Nepal and Tibet. These places were blessed by Padmasambhava and became sacred till now. For example, he practised the Vishuda deity at the cave of Yanglashod in Nepal. And, He took his wife, Mandarava, to the mountain cave of Maratika, known as Halesha in present day in Nepal, where they performed the accomplishment rituals of longevity for three months and actualised the immortal Vajra body. 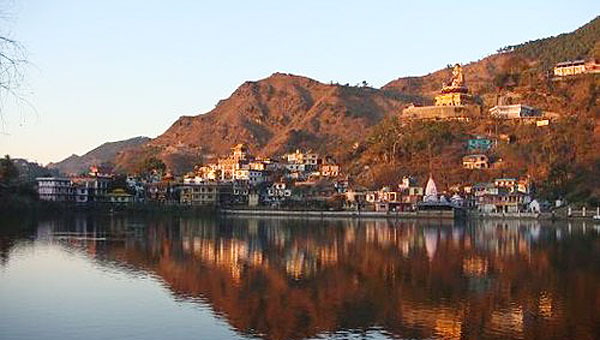 Padmasambhava’s activities of taming people and performing enlightened activities for the sake of sentient beings are renowned as Eight Manifestations. These activities were recorded in detail in his biography and many books.

Spread the Dharma in Tibet

Trisong Deutsen, the 38th king of Tibet (742-797), invited Padmasambhava to Tibet. Along the way, he used his tantric powers to subdue all the harmful gods and demons he encountered, and made them faithful guardians of the Dharma. In Tibet he and the king founded the first monastery in the country Samye monastery and fully furnished it with statues. In addition, they gave monk’s vows to Tibet’s first seven monks, standardized translation methods, supervised translation of most of the sutras and tantras from Sanskrit to Tibetan, and for the first time in Tibet, firmly established the tradition of study, contemplation, and meditation, thereby radiating the Buddha Dharma in Tibet like rays of the sun.

Padmasambhava stayed in Tibet for 55 years. In this period, he inspired people’s faith to the Dharma, brought Buddha Dharma from India to Tibet, and transformed Tibet to be a Buddhist land. Without Padmasambhava’s activities in Tibet, there might be no Tibetan Buddha Dharma today.

For the sake of future aspirants in the future, Guru Padmasambhava concealed eighteen varieties of treasure which include treasure texts, material wealth, holy images and so forth. He gave explicit prophesies regarding the future manifestation of these treasures, including the revealer and protector of the treasure, as well as time of revelation.