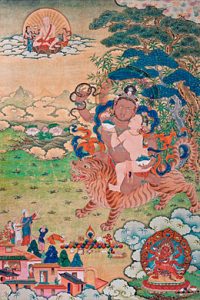 Dombi Heruka, lived late of the eighth century to the ninth century, is one of the eighty-four mahasiddhas in India. He is also a holder of the Hevajra Tantra.

In the country of Magadha, there was a man of royal birth who had attained siddhi from Hevajra. He had been initiated by the guru Virupa, one of the 84 mahasiddhas in India and source the Sakya school, and having been granted the instructions, he experienced their meaning. Though he regarded his subjects as a father thinks of his only son, the people did not know that their king had entered the door of the Dharma. But he was kindly by nature, so all the people unanimously affirmed: “This king is indeed a pious man.”

One day the king said to his minister: “The people are suffering in our country. Thieves and robbers are destroying property, and because of the people’s little merit, there are increasing numbers of poor and indiginous. To deliver the land from fear and poverty hang a great bell on the trunk of a tree. If anyone witnesses a crime or sees poverty let him strike this bell.” The minister did as he was told and fear and poverty were bought to an end in Magadha.

A while later a group of low caste singers came to the capital offering to sing and dance for the king. One of the singers had a 12 year old daughter who was very attractive. She had a lovely face and a good complexion; furthermore she was unsullied by worldly thoughts and had all the qualities of a padmini. So the King said to the low caste singer, “Would you give your daughter to me?”

To this the singer replied, “Your majesty is a king of Magadha, you rule 800,000 cities. Because of your royal wealth you do not have to work for a living. We are of low caste, denigrated and shunned by other classes of people. It is not fitting for you to make such a request.”

The King made his request again, but in a more forceful way; he took the girl after giving her father a sum equal to her value from the treasury. For 12 years the people did not know that she was the King’s tantric consort, but eventually it was discovered. Soon it became known to everyone throughout Magadha, the king consorts with a low-caste woman.

So the king abdicated in favour of his son and with his low-caste consort went into the jungle. There in an idyllic hermitage in solitude they continued practicing their tantric yoga for twelve years.

Meanwhile the kingdom was misgoverned. The quality of life diminished as virtue ebbed to a low level. A council agreed to request the old king to return to govern, and a delegation was sent into the jungle to find him.

The king, in union with his consort, came riding out of the jungle on the back of a pregnant tigress, brandishing a deadly snake as a whip. After the people had overcome their fear and astonishment they begged him to take up the reigns of government again.

“I have lost my own caste status by consorting with an outcast woman,” the king told them. “It is not proper for me to resume my original position. However, since death ends all distinctions, burn us. In our rebirth we will have been absolved.”

A great pyre of cow-head sandalwood was constructed, and after the king and his consort had mounted it, it was ignited. The huge pyre burned for seven days, and when it was cool enough to approach, the people caught sight of the two of them shimmering, as if covered in dew drops, in the spontaneously arisen illusory form of the Buddha-deity Hevajra in union with his consort, in the heart of a fully-blown lotus.

Stepping out of the fire the king addressed the ministers and all of his people of the four castes. “If you emulate me, I shall stay to govern you. If you will not help yourselves, I shall not remain to govern you.”

“Political power is of little benefit and the retribution is great. Those who wield authority can do little good, and more often than not the damage that flows from their actions leads to misery for all in the long run. My kingdom is the kingdom of truth!”

He spoke, and in that instant of immortality he arrived in the Dakini’s Paradise, where he remains for the sake of perfect awareness and pure delight.