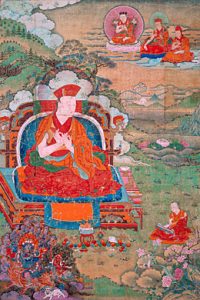 Ratnabhadra was born into the well-known family of Soksam in the 14th Century CE. He was considered to be an emanation of the Kenting Tai Situpa.

At a young age, Ratnabhadra was ordained as a monk. He received higher training in Buddhist philosophy, logic, and other fields of knowledge at Palden Sangphu college. Situ Ratnabhadra then visited the great monastic institutions in Tibet, engaging in debate and discussion on the four main topics of Madhyamika, Prajnaparamita, Vinaya, and Abhidharma. He became one of the greatest scholars of sutra and tantra and thus was called Rigpe Raltri (sword of philosophy and logic).

He received the full transmission of the Kagyu lineage from the 5th Karmapa Deshin Shekpa, through which he attained complete realization. He became one of the supreme meditation masters of the time.

Ratnabhadra was also the lineage holder, one of the masters in Lineage tree, and a teacher to the 6th Gyalwa Karmapa.