In 1983, he traveled to Tibet with Drupon Dechen Rinpoche, Mahey Monastery’s abbot, to serve as his attendant. There, Lama Tsering was asked to teach traditional Cham Lama Dance at Tsurphu Monastery. He is well known as a master performer of this discipline, which he learned and practiced at Mahey Monastery. Cham Lama Dance is a Tibetan sacred dance considered a form of meditation practice and religious instruction.

From 1989 to 1992, he studied and practiced in the traditional Karma Kagyu Three-Year Retreat at Palpung Tingzin Gephel Ling retreat center, at Palpung Sherabling, under the guidance of Guru Vajradhara Chamgon Kenting Tai Situpa, V.V. Saljey Rinpoche and Retreat Master Lama Tsultrim Rinpoche. After the completion of his retreat he returned to serve Mahey Monastery for three years.

In 1996, he entered Palpung Sherabling Monastic Seat where he continued his practices and carried many responsibilities for the monastery. In 2003, he was given the position of lama for the Mahakala Shrine, where he carried out this responsibility for three years. From 2006 to 2009 he received many profound and vast teachings, transmissions, empowerments and instructions of Dzog Chen Nam Nga (Five Treasuries), Shangpa Kagyu Traditions and Mahamudra (Ocean of Certainty) from Guru Vajradhara Chamgon Kenting Tai Situpa, Sangye Nyenpa Rinpoche, and V.V. Yongey Mingyur Rinpoche at Palpung Sherabling Monastic Seat.

In 2006, he was appointed resident Lama at Palpung Kunchab Choling Monastery, Manduwala, Dehradun, Uttarakand, India, where he served for nine years. Following the completion of his responsibilities there, he received consent from  Guru Vajradhara Chamgon Kenting Tai Situpa to go to the mountains to do a strict solitary retreat. He spent one and a half years in Gharsha Phagpa mountains, in Lahual-Spiti and six months at Tsopema, in Rewalsar-Mandi. Lama Tsering has resided at Kagyu Thubten Chöling Monastery since July 2017. 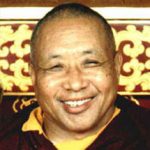