The future Buddha of the fifth in Bhadrakalpa (the present period) is Maitreya Bodhisattva, who is the successor for Buddha Shakyamuni, the fourth Buddha. The prophecy of the arrival of Maitreya is found in the canonical literature of all Buddhist sects. It was Buddha himself gave words of prophecy to Maitreya Bodhisattva for his destiny in Gridhrakut around Rajgir.

Mi-Lar is the transliteration of Maitreya in Mandarin. Maitreya is Maitreyavyakarana in Sanskrit for short. In ancient China Maitreya was translated into Mandarin as “Tsu”, which means compassion. Tsu then became the last name and Ajita as first name for Maitreya. Both in Sanskrit and in Tibetan term, Maitreya was named Ajita. In Han dynasty of ancient Chinese history, Maitreya was interpreted as Ajita Bodhisattva; later in Tan dynasty Maitreya was called Ajita as well but in tradition he was well known for the title of Mi-Lar. It was recorded in some sutras that Buddha also named Maitreya for Ajita. Ajita is a Sanskrit name which means invincibility.

As the Sutra said, Maitreya was born 42 Kalpas earlier than the Buddha Shakyamuni, once followed Buddha Ratna-chattra and became enlightened thereafter. Maitreya now resides in Tusita heaven where he preaches sermons to heavenly-beings. Maitreya will be reborn in Jambudvipa as a human form 5,670 million years later when humanity reaches a lifespan of 80,000 years old. Later Maitreya will reach Buddhahood under the lung-hwa tree in the Garden of hwa-ling.

Maitreya is typically pictured seated, with both feet on the ground. He is dressed in jewels, wears a small stupa in his headdress, and could be holding a chakra wheel resting a lotus. A scarf is always tied around his waist. 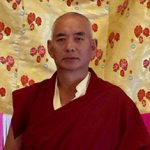