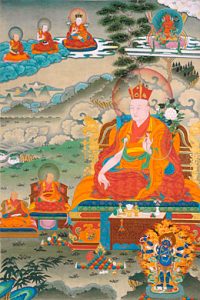 The 11th Kenting Tai Situpa (1886-1952) was born in the male fire dog year in Lithang. There were many unusual and highly auspicious signs at that time. The 15th Gyalwa Karmapa drew a map describing the place Kenting Tai Situpa reborn. The map was so detailed that even a dog tethered in front of the house was drew. Pema Wangchog was found absolutely accurate according to the prediction of the Gyalwa Karmapa. At the age of four years, he was recognized by the Gyalwa Karmapa and taken to the great Palpung monastery.

From Khakyab Dorje, the fifteenth Karmapa, he received ordination and teachings. The second Jamgon Kongtrul Rinpoche also taught and bestowed many empowerments on him.

The 11th Kenting Tai Situpa renovated thoroughly the main shrine and shedra of Palpung monastery, expanded the printing press and produced many new printing plates. He also made many fine dresses for Lama Dances.

Kenting Tai Situpa was renown to be a strict disciplinarian, enforcing monastic rules and harshly punishing those who were hypocrites or damaging their practice. He closely guided the various satellite monasteries of his in Tibet. He traveled to and taught at over one hundred and eighty monasteries, all which were guided by him. All these activities and the merits of Kenting Tai Situpa brought huge offerings and assets to Palpung Monastery. These assets include horses, sheep, yaks, salt lake…etc. Some group, including Nyingma school and Bon school, even donated their monasteries as offerings. As a result, Kenting Tai Situpa became responsible for recognizing the monasteries’ tulkus.

Kenting Tai Situpa later recognized the sixteenth Gyalwa Karmapa, Rangjung Rigpe Dorje, and performed his enthronement and ordination. He transmitted the complete teachings to him and bestowed all the initiations, explanations and empowerments.

At about the age of fifty he visited the great Surmang monastery, and performed there many miracles. Kenting Tai Situpa spent the rest of his life partly in meditation and partly giving teachings to his many disciples. At the age of sixty-seven, he passed away amidst many auspicious signs.