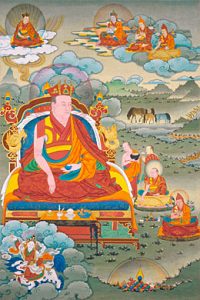 In the year of the wood-tiger,
In Tang-Lha’s land,
The emanation of Samantabhadra,
Guide of beings, will appear.

The tenth Kenting Tai Situpa, Pema Kunzang Chogyal(1854~1885), was born in Namtso in Jang, near to a lake, in the male wood-tiger year. His formal enthronement was performed by the fourteenth Karmapa, Thegchog Dorje and the first Jamgon Kongtrul Lodro Thaye.

From an early age, Kenting Tai Situpa displayed many spontaneous miracles and higher perception. Through the activity of his accomplishment, Kenting Tai Situpa crossed the Yangtse river in flood season on horseback. He also descended the Heaven’s Ladder at the retreat center on horseback, and rode an untamed horse from Derge to Palpung in two hours. Many people found flowers in the horse’s hoof-prints; it is said that Khyentse Rinpoche has some of these in his possession.

Once, when traveling  to central Tibet, Kenting Tai Situpa’s entourage came to a river swollen by the monsoon rains. Everyone said that it would be impossible to cross and began to pitch their tents. Kenting Tai Situpa gave everyone a fierce scolding and all of the persons entered the torrent at his command. They reached the other side without incurring any harm whatsoever.

Such stories about Pema Kunzang were common, but still he was criticized as being “the wild Situ”. In response to this one of his spiritual masters, Jamyang Khyentse Wangpo praised him saying, “He is really the precious master from Oddiyana [Guru Rinpoche] in the flesh.”

Although the 10th Kenting Tai Situpa was generally given to wild behavior, such as wearing masks and costumes, drinking alcohol, competing in horse races and shooting rifles, he scrupulously avoided sexual relations because all of the Kenting Tai Situpas have appeared only as holders of pure monastic discipline.

He spent the whole of his life perfecting the Kagyu teachings and became a Siddha. He left many of his footprints on rocks and was able to walk up sheer mountain faces. At the age of thirty-two, in the year of the wood-bird, he passed away. There were numerous highly auspicious signs. Ongen Rinpoche helped Jamgon Kongtrul Lodro Thaye setup the memorial ceremonies and constructed a stupa in honor of the 10th Kenting Tai Situpa.