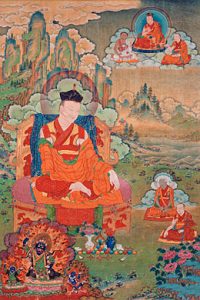 Kenting Tai Situpa traveled to China with the Karmapa. The Chinese Emperor Tai Ming Chen (Yungle), an emanation of the Bodhisattva Manjushri, conferred the honorific title “Kenting Naya Tang Nyontse Geshetse Tai Situpa” on Chokyi Gyaltsen as well as a black crown, a crystal seal and other gifts.

In 1437, the Chinese Emperor Tai Ming Yin, conferred on Kenting Tai Situpa the titles “The Kindness Master who performs empowerments” and “The Master of Ming”, and many other gifts.

Kenting Tai Situpa spent most of his life meditating in caves and became a perfect example of the Buddha’s teachings. For his no attachment to the honor and reputation, he was called “A great master who is limitless Indifference, or giving up all things”. He passed away aged 71.