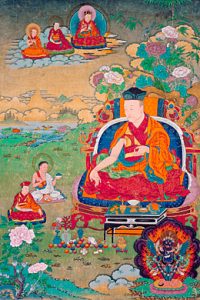 The 2nd Kenting Tai Situpa (1450-1497) was born in the iron-horse year, into a royal family of Tibet. He was recognized by the 6th Gyalwa Karmapa. The Karmapa enthroned him and bestowed to the Kenting Tai Situpa the entire lineage. The 6th Karmapa also gave Karma Gon Monastery to be under the complete guidance of the 2nd Tai Situpa. Karma Gon Monastery became famous for its collection of Sanskrit texts, artwork and scholarship.

The 2nd Kenting Tai Situpa became a tutor to the 7th Gyalwa Karmapa. He visited many parts of Tibet, giving teachings and empowerments. He was highly venerated by the Chinese Emperors who granted to the 2nd Kenting Tai Situpa an imperial edit written with golden ink and a crystal seal and other gifts. There were many auspicious signs of accomplishment appeared when he passed away.