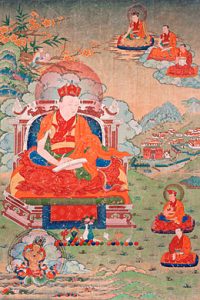 The sixth Kenting Tai Situpa(1658-1682), Mipham Trinlay Rabten, was born in Mesho, Dege to the family related to Dege King Kunga Phuntsok Phundo. He was recognized and enthroned by Choying Dorje, the tenth Karmapa who passed all of the teachings to him. He studied at Tsurphu and Karma Gon monasteries where he impressed everyone with his great learning and insight.

He made many predictions about his future incarnations to Alo Paljor. He performed the miracle of hanging his robes and rosary on a sunbeam and left many of his footprints on stones and rocks.

The sixth Kenting Tai Situpa was a great Sanskrit scholar, astrologer, doctor and a fine painter. Many beautiful thangkas were made by his hand, and he also composed the Sung Bum a compendium of all knowledge.