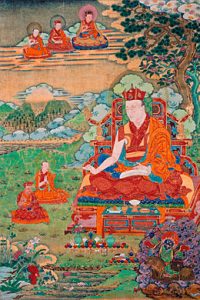 The 5th Kenting Tai Situpa (1586-1657) was born in the male fire-dog year. He was recognized by the 9th Gyalwa Karmapa, and from the Karmapa received all of the teachings.

Kenting Tai Situpa traveled to Jangsadam at the invitation of the King and bestowed teachings to numerous devotees. He was also bestowed by he Chinese Emperor the titles “The Kindness Master who performs empowerments” and “The Master of Ming”, and many other gifts.