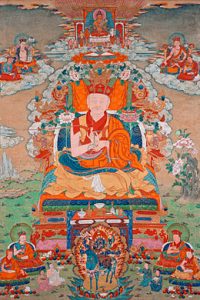 The birth of the eighth Situpa, Chokyi Jungne, was recorded in many texts and literatures, and many great masters made the prophecies of his arrival. For example, the 11th Karmapa, Yeshe Dorje, ever predicted the place where Chokyi Jungne was born.

The eighth Kenting Tai Situpa, Chokyi Jungne (1700-1774), was born in the province of A-Lo Shega at Atarong as the prophecy. His father was Ngawang Tsering and his mother Tranguma.

When Chokyi Jungne was born, lama Kunchen, a master of the Treasure Transmission Lineage, performed Dorje Drolo ceremony for him and gave him the name “Gonpo Sun”.

At the age of five years, Chokyi Jungne began to learn to read and write Tibetan from his father, and performed a Vajravarahi (Dorje pagmo, Vajra Yogini) ceremony taught by lama Kunchen.

At the age of seven years, the eighth Shamar Chokyi Dondrup conferred a longevity prayer on him, and conferred the name “Situ Chokyi Jungne Trinley Kunkyab Palzangpo”.

At the age of nine years, Chokyi Jungne suffered from a serious illness because one relative of his father put poison in his food for sake of jealousy. Two months later, he was on the mend, but he still could not stand or just sit. He lay on the bed and read twice all the literatures in Paljor monastery. At the same time, Chokyi Jungne also learned five knowledge , India local language and Sanskrit. He could communicate with people precisely and fluently in Chinese, Sanskrit, or Mongol. Only a little teaching, he could become skillful in all kind of painting, carving… etc., even better than those who learned these skills for their whole lives. In short, Chokyi Jungne became famous as “thorough knowledge”.

A statue of Chokyi Jungne located in Derge Printing Press At the age of fourteen years, he was recognized according to predictions left by Karmapa Mikyo Dorje, by Terton Sangye Lingpa, Takshampa Mingyur Dorje and by the eighth Shamar Chokyi Dondrup. He was taken to Tsurphu monastery for his enthronement and he received all the teachings and empowerments and studied philosophy and medicine from Karmapa Jangchub Dorje, Shamar Rinpoche, and Rigzin Tsewang Norbu.

At the age of twenty two years, Chokyi Jungne convened scholars in He-Le to transcribe Tengyur based on the transcript kept in Chiwa-Datse. After completing the transcribing in two months, he traveled west to Nepal on pilgrimage, discussing knowledge with many scholars.

At the age of twenty three years, he visited Ladakh and performed an empowerment for the king and his family. Then, he returned to Paljor monastery. At that period of time, he painted a set of thangkhas of eight mahasiddhas using the style of Gadri school of painting, and offered them to the king of Derge.

Palpung monastery On the second day of the third month in the female fire sheep year (1727), at the age of twenty eight years, Chokyi Jungne, under the permission of the king of Derge, he began to found the great Palpung monastery, and accomplished the founding on the tenth day of the eighth month in the year. He also built and restored countless other monasteries throughout his life. Palpung Monastery became the main seat of the Kenting Tai Situpas, and it was the inspiration for the founding of Palpung Sherab Ling Monastery in India by the 12th Kenting Tai Situpa Pema Donyo Nyinjey centuries later.

The King of Derge, Tenpa Tsering Chokyi Jungne revised texts of Kagyur, Tengyur of Derge transcript, and many literatures in order to make print plates of them. His disciple, Tenpa Tsering, the King of Derge, established the Derge Printing Press. Chokyi Jungne successively helped the Derge Printing Press to produce over 500,000 wood block prints. These prints are such fine quality that the major ones have been reprinted in modern editions and circulated to Tibetan archives in libraries throughout the world.

Chokyi Jungne painted a series of thangkhas which descript stories of Buddha Shakyamuni. These thangkhas which were painted in Indian style, decorated with imitated China embroideries, were very different form the existed Gadri school in layout, outline and colors, and called the new Gadri school (Karma Gadri). Chokyi Jungne also painted many other thangkhas and made many sculptures, which all enrich the Tibetan art culture.

At the age of thirty years, Chokyi Jungne went to Tibet for the third time. He visited Tsurphu monastery for the opening of a great statue. Then he stayed in Tibet on pilgrimage and teaching for four years.

In the wood cow year, Chokyi Jungne went to Tibet for the fourth time. He recognized and enthroned the new Shamarpa. Then he visited Nepal again on pilgrimage and was highly honored there. Once, after a debate with Pandita Jaya Mangola of Kashmir, it was proclaimed by the local Hindus that Kenting Tai Situpa must have been blessed by the Lord Shiva, since that was the only way he could have achieved such insight and learning.

At the age of fifty years, according to the Tibetan medical texts Chokyi Jungne made the famous medical pill “Moon Nectar Pill”. In the fire mouse year, he made one kind of special pills which grew themselves more and more and spilled out of the bottle, and then the pills became all kind of Buddha. Afterwards, Chokyi Jungne performed more experiments and made many special pills. He became a skilled physician and a master of Tibetan medicine. He composed and wrote some medical books, which were deemed as valuable medical guidance still now.

At the age of sixty years, The Kenting Tai Situpa visited Jangsadam, south of China, for the second time. In there, he lightened the lamp of Buddha Dharma, rebuilt thirteen monasteries of Kagyu school. In the same period of time, he translated many texts from Sanskrit, including prayers to Bodhisattva Tara.

He also visited China at the invitation of the Emperor Chien Lung (1735-1796) and was highly honored.

At the age of sixty three years, he visited Tibet on pilgrimage for the fifth time. He retreated in a Drikung monastery. At that time, when he performed any kind of offering ceremony, a miracle emanation vision of Dorje Drolo showed up. Once in a Tara fire offering ceremony, the tent he slept grew many blue lotuses. In usual time, he kept reciting mantras except short rest time at noon and night. He recited three hundred million times of all kind of mantras. He showed many miracles like just an intention to stop a rainstorm, spreading barley to the sky and the barley straightened on the ground.

He found and recognized the 13th Karmapa Dudul Dorje, and personally taught the Karmapa and imparted the complete linage to him.

At the age of seventy two years, Chokyi Jungne invited the 13th Karmapa Dudul Dorje to Palpung monastery. He performed Taisho Tripitaka lineage empowerments and teachings for the Karmapa. At that time, the sky was filled of colorful clouds, a sacred sign enhancing people’s faith to the 13th Karmapa.

In 1774, at the age of seventy four years, Chokyi Jungne was invited to China. On the way to China, while meditating in the lotus posture of a Buddha, the Kenting Tai Situpa passed away. It was observed that his heart-region retained heat for seven days and there was a strong smell of incense everywhere. Kenting Tai Situpa predicted his next rebirth before his passing.

The 8th Kenting Tai Situpa was one of the most famous masters in Tibetan history. He was acknowledged as a supreme scholar who had no equal in the five knowledge. He is honored a unique title “Maha Pandita”. His fame reached well beyond the borders of Tibet at this time. He also built or rebuilt many monasteries of different lineages. These monasteries became Palpung’s satellite monasteries, even in mainland China, exceeding well beyond a hundred.

It is said that his limitless activities were equal to those of Nagajuna’s in India. It was also a common saying at the time, that if all of the other Kagyu monasteries came together, their activity wouldn’t be equal to that of Situ Chokyi Jungne.