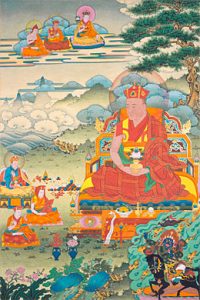 Before his pass away, the eight Kenting Tai Situpa Chokyi Jungne indicated that Pawo Rinpoche would recognize his incarnation.

The ninth Kenting Tai Situpa, Pema Nyingche Wangpo (1774~1853), was born in Yilung, near Derge in Kham, eastern Tibet in the year of the wood-horse. He was recognized by the Karmapa and Pawo Rinpoche, who had received a prediction from Guru Rinpoche in a vision concerning Kenting Tai Situpa’s rebirth.

At the age of five years he was formally enthroned and received all of the teachings of the lineage from Karmapa Dudul Dorje, Shamar Chodrup Tenzin, and Dzigar Dorje Drakpa, amongst other accomplished masters.

The ninth Kenting Tai Situpa renovated Palpung monastery and made countless precious offerings to many monasteries of all traditions. He authored over two hundred treatises and combined the traditions of the Tibetan lineages.

His life of freedom demonstrated genuine great accomplishment, and he exerted a great spiritual influence on the precious doctrine of the practice lineage.

He spent most of his life in deep meditation and was a renowned scholar and teacher and performed many miracles such as leaving footprints in rock. Kenting Tai Situpa’s wisdom was well-known. In one case, he even surprised a monk with his omniscience: Kenting Tai Situpa reprimanded the monk for his alcoholism. Even though the monk thought his weakness was done in secrecy, evidently it could not pass the all-knowing wisdom eye of the Kenting Tai Situpa.

At the age of 61 years he entered the retreat centre at Palpung, Drubde Samtenling, and practiced the teachings for eighteen years. At the age of 79 he passed away. At that time the sky was filled with rainbows and there were many other highly auspicious signs.