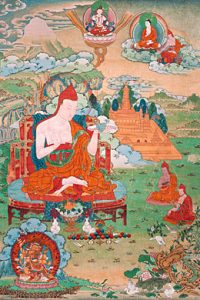 During this period the Bodhisattva of Compassion, Avalokitesvara, appearing time and time again, requested Shri Singha to visit the Sosaling cremation grounds. In this lifetime, the Kenting Tai Situpa perfectly demonstrated the life of a fearless scholar and meditation master. Shri Singha became extremely advanced as a meditation master during his years at Wutai Shan. Through this accomplishment, he was able to quickly visit Sosaling, which is west of Bodh Gaya in India.

Before returning to China, Shri Singha resealed the sacred texts in the pinnacle chamber of the Bodhi Tree Temple at Bodh Gaya. He spent much of his life practicing around the cremation grounds as a fearless practitioner; he truly attained freedom of body and mind. On his way to visit the King of Khotan, Shri Singha passed away attaining the rainbow body. He dissolved into space for all to see, a sign of spiritual attainment.

The lineage of Shri Singha was passed onto Vimalamitra and Vairochana; these two masters, along with Padmasambhava, brought the Dzogchen lineage to Tibet.