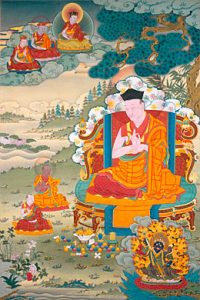 The third Kenting Tai Situpa, Tashi Paljor, was born in the earth-horse year to a family descended from the kings of Tibet. He was recognized and enthroned by the seventh Karmapa and from him he received the complete teachings. He resumed the responsibilities of the lineage of Kenting Tai Situpas at Karma Gon monastery.

The 7th Karmapa Chodrak Gyatso, said that he and Situ Tashi Paljor were inseparable. The Kenting Tai Situpa found and enthroned Mikyo Dorje, the eighth Karmapa, and offered the complete teachings to the Karmapa.

Kenting Tai Situpa received golden tablets from the Emperor of China written in silk of five colors, and in five languages, praising his wisdom and abilities.