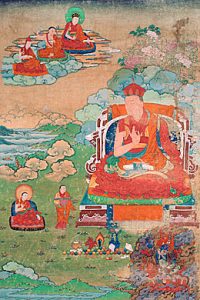 The 4th Kenting Tai Situpa (1542-1585) was born in Tsigyu, near Surmang, in the water-tiger year. He was recognized and enthroned by the 8th Karmapa, from whom he received all of the teachings. The Karmapa acknowledged the Kenting Tai Situpa as a disciple identical to himself. Kenting Tai Situpa continued as the great leader of Karma Gon Monastery, renowned for his knowledge and insight.

The 4th Kenting Tai Situpa in turn recognized and found the 9th Gyalwa Karmapa. Kenting Tai Situpa bestowed the long life empowerment of Amitayus on the Karmapa after his discovery. The Kenting Tai Situpa’s recognition was later on confirmed by the prediction letter left behind by the 8th Karmapa, which was in the possession of the 5th Shamarpa.